Why Kids Should Write Letters | Kids Out and About Buffalo

Why Kids Should Write Letters 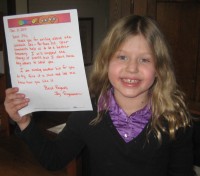 Because it matters what kids think...
...and people and companies really listen

When I was 8 years old, Jimmy Carter was President, and his daughter Amy was 9. I was impressed at the idea of a little girl like me living in the White House. So I wrote Amy a fan letter. At the time, I didn't think of why I might write to the daughter of the President; I just thought it was a cool thing to do. A few weeks later, to my shock, I received a signed photograph of Amy Carter in the mail. For the first time in my young life, I realized that even a small and insignificant person like me could make something happen. I could send a letter to Washington, D.C. and it might be important enough that someone would write back. I was important.

Fast forward to more than 30 years later: Last Christmas, my 8-year-old daughter Ella received The Ultimate Spa and Perfume Kit, produced by Scientific Explorer of Ann Arbor, Michigan. She was thrilled. Always the beauty queen, she was excited at the idea of combining her interests in science and makeup. The kit would let her concoct her own bubble bath and perfume, in three exciting scents: Caribbean Coconut, Sweet Strawberry, and French Vanilla. So she opened up the kit with great anticipation, only to discover quickly that she found the three fragrances all to be "so gross that they give me a headache."

"Well, tell them about it," I said. In economic times like these, where the profit margin is small and retaining a customer is everything, most small businesses have a choice: listen to their customers, or go out of business. Ella represents the primary target market of Scientific Explorer. I suspected that a well-written letter would make their customer service department pay attention.

So Ella asked me to help her find the address--which, in the Internet age, is a snap. And, with a few suggestions from me about the kinds of things she should say in the letter, she carefully typed a letter to the company. It started like this:

To the creators of the Ultimate Spa and Perfume Kit:

I got the Ultimate Spa and Perfume kit for Christmas. And when I opened it and used it, the fragrances smelled really bad. So bad that after doing the smell experiment, I didn’t want to do any more.

After Ella detailed the reasons the product didn't meet her expectations, she ended with a friendly suggestion that the company send her some other scents, if they had them, so she would be happier about the product.

Thank you for writing about the Ultimate Spa and Perfume Kit. Your comments help us to be a better company. I will suggest the change of scents, but I don't have any others to send you. I am sending another kit for you to try. Give it a shot and let me know how you like it.

My point is not that kids should write notes of compliment or complaint simply as a means of encouraging companies to send them free stuff in the mail -- that's just a nice bonus. (And, of course, not everyone's experience with a company will be quite as satisfying as my daughter's.) What I think is important about this experience is that Ella was far more excited by the fact that she saw that her letter made a real difference than by the fact that she got two free kits in the mail. She now thinks of herself as "someone who writes letters that people listen to."

Who should receive letters from your child?

If I have sold you on the idea of encouraging your child to start writing letters, a great way to start doing this is to have them write to authors that they admire. I am a member of RACWI (Rochester Area Children's Writers and Illustrators) and also SCBWI (Society of Children's Book Writers and Illustrators). I have been to many conferences and have talked with many other children's authors. I can tell you that they LIVE for feedback from their readers. (Only a tiny minority make great money at children's book writing... believe me, they do it for the love of it and not for the money.) I see many authors post the notes they receive on their Facebook pages or blogs: ("A great day for me today: Here is a note I got from Mrs. Toomey's 4th-grade class in Tulsa, Oklahoma..."). Please: Tell young people how much it inspires the authors they read and illustrators they appreciate to receive personal notes from real live kids. It usually takes only a few seconds for a web search to locate an authors's email address or the publisher's physical address. A tiny bit of effort from your child to put her appreciation into words means a great deal to an author.

Help your child see that a democracy is about the voice of the ordinary individual American. Writing letters to elected officials, especially from a child's parent's district, is likely to elicit at least a form letter in response, and probably more than that, if the child is writing about something particular (and, especially, a compliment). Of course, it's the elected official's staff members that write the response letters, but think about it: If you worked for a local representative, wouldn't response letters for articulate kids float a bit to the top of the list? It would for me.

Companies, especially small businesses that want more business from you

In an era where personal communication with a company is as close by and as public as their Facebook page, a note from a child (and I would say especially from a child, more so than an adult) will be read, and discussed, and, quite likely, responded to, by real people who care about his or her opinion, and who care about maintaining a good relationship with your child (and with you). I suspect that this is especially true if your child is making a thoughtful complaint or suggestion, but probably almost as valid if your child simply wants to send a compliment. After all, as a result of this, am I--the person with the credit card--more likely to seek out Scientific Explorer products than I was before? You betcha! (Except for the scented ones, that is.)

Here are some tips for writing to companies:

Debra Ross is publisher of KidsOutAndAbout.com. If your child writes a letter as a result of your reading this article, she would love to hear about it! Contact her at ross@kidsoutandabout.com.