Watching Harry Potter and the Deathly Hallows Part 2 with Kids 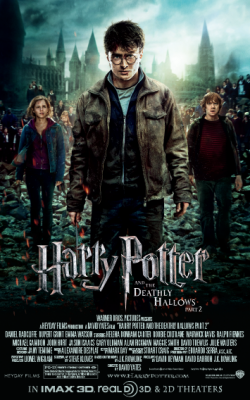 What You Need To Know

Parents of Harry Potter fans! (Who are, let's face it, probably also Harry Potter fans. I know I am.) Here's what you need to know before taking kids to the theater to see the eighth and final movie, Harry Potter and the Deathly Hallows Part 2.

1. The movie is worth seeing in the theater rather than waiting for the DVD. We saw our screening in 3-D, but aside from the nifty Harry Potter 3-D glasses, I can't say that 3-D really added much to the experience of the film.

2. It is rated PG-13 for a reason. There is violence, there is death, there is tension, there is ugliness. There is a teeny bit of profanity (slang word for female dog). There is not lots of gore—at least, no more so than in the other movies. If your children have already seen The Order of the Phoenix or Deathly Hallows Part 1 and enjoyed them, they will enjoy this movie. But if they had trouble with those movies, they're probably not ready for this one.

3. It is indeed necessary to see the other movies in order fully to understand—and therefore enjoy—Deathly Hallows Part 2. My husband accompanied us to Part 1 in November, and, not having read the books, was clueless. If you haven't seen the movies, I would suggest a Harry Potter marathon, then hightail it over to the theater to see Part 2 on the big screen.

4. Bring a hankie. But not as big a hankie as you might expect. The death scenes in the second part of Book 7 that made all of us put down the book and weep long and hard are treated so fleetingly in this movie that you don't have much time to sob before it's on to the next bit of action. I can't decide whether that's a good thing or a bad thing, but it's worth knowing.

5. Molly Weasley's famous line in Book 7—one of the most soul-satisfying lines for mothers in a book ever—indeed made it into this movie. And actress Julie Walters delivers it exactly as brilliantly as J. K. Rowling rendered it. If your theater doesn't erupt in wild applause as a reflex, you should start it yourself.

6. One of the previews during our screening was for Steve Carell's new movie, Crazy, Stupid, Love. The preview is completely inappropriate for the pre-teenagers in the audience. It portrays romance and sex not with the dignity of mature adults, but with the stupid, giggly, titillating quality we see in so many Hollywood movies—exactly the opposite of what we have come to expect from the Harry Potter experience. I won't even dignify the treatment of its theme—infidelity—with the word "adult." So if this preview is shown during your viewing of Harry Potter and the Deathly Hallows Part 2, I give you permission to be rude. Talk with your kids, snap photos of them with your cell phone, or get popcorn while it is on. Sheesh. Someone used really poor judgment there.

7. Notice the Biblical and cultural references of the book and movies, and talk about them with your kids. It's fantastic cultural literacy. The Harry Potter series focuses our attention on themes that have occupied Western culture for a few thousand years: good and evil, sacrifice, bravery, chosen and unchosen obligations, duty, bigotry, loyalty, thinking things through versus mindlessly following orders. Think about these ideas before you go, so you can notice them in the film and talk about them with your kids afterward. Discuss how they apply to life today.

8. This may be the best film in the series. If you have enjoyed the other films, you will absolutely not be disappointed. The acting is top-notch. The special effects are awesome without being overdone. The themes are moving.

9. If you're a mother, you will experience the mixed emotions of watching that little boy you have loved and felt protective of become a man who unflinchingly saves the world from evil. You'll be sad it's over. And you'll be glad all of these people who have brought such value to your family's life are experiencing the wealth comes from such an accomplishment, so you won't mind the ticket prices. You may even want to go back for a second (third, fourth...) viewing.

10. That being said, you needn't spend more money than necessary. You may want to bring cash for real-movie-popcorn and the like; to you, that may be part of the movie experience. But bring your own bottled water, at least. I mean, five dollars? Seriously?

© 2011, Debra Ross. Debra is the publisher of KidsOutAndAbout.com, a Harry Potter fan, and mother of an 11-year-old Ravenclaw wannabe.
Web Service