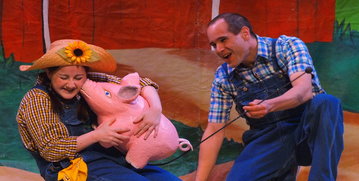 CONS: Animal models were sometimes too low to see, and the First Act was an hour long.

PROS: The children became completely immersed, and the adults didn’t blink when kids behaved like kids. I also loved the Q & A with the actors after the show where we learned about what goes on behind the scenes.

BOTTOM LINE: This is a wonderful adaption of E.B. White’s novel and a relaxing environment for parents to introduce live theater to their kids. It seemed to me that the kids who were already familiar with the story, either from the book or movie, got more out of the experience. But I wouldn’t be surprised if those who saw the play first went home and asked to read the book!

Joseph Robinette’s adaptation of the story streamlined and simplified the major themes E.B. White wove into the novel. His interpretation made them more accessible to younger audience members and allowed the story to be faithfully reproduced. The play didn’t gloss over Wilbur’s uncertain future or ignore the powerful, peaceful death of Charlotte. Instead, it relied upon the impressive skill of the small cast to imbue their characters with silliness, love and dignity to explore this uncomfortable topic. Death isn’t the only major theme found in the story, however, and Robinette handles them as deftly. Rather than utilize subtlety or symbolism to get the important lessons concerning friendship and loyalty to the audience, Robinette uses direct dialogue amongst the characters so there is no ambiguity or misunderstanding.

The small cast did a tremendous job of portraying multiple characters seamlessly. TOY veteran, Kurt Erb, was noteworthy as he transitioned from Avery (Fern’s obnoxious brother who made me want to stick my tongue out at him) to Lurvy (the good natured, gentle and earnest farm hand) to a contest judge (incredibly fussy and slightly persnickety). Erb topped off his transitions by perfectly personifying Gander (the proud father and devoted husband of the barn). Danica Riddick, another TOY veteran, brought Charlotte to life with elegance, dignity, warmth and grace. Kurt Guba, an accomplished actor and TOY veteran, portrayed a Wilbur who is confronted with his own mortality as well as the death of his best friend.

Guba’s Wilbur is at times completely mischievous and childlike and at other times reflective, determined and earnest. Through Guba’s interpretation, we watch Wilbur learn and implement life’s universal lessons of friendship, selflessness and loyalty.

My daughter’s favorite character from the book and the play was Templeton, the rat, played despicably, deliciously and lovablely by Adam Rath (who also plays Zuckerman and a Contest Judge). Rounding out the cast are Arin Lee Dandes (Fern and Goose) who embraces her characters with spirit and silliness and Chris Labanca who wins the “Portrays Most Number of Characters” award at a whopping five.

As the Narrator, Labanca engages with the audience in a very endearing and graceful manner which is completely absent from his cranky portrayal of the Sheep. Both of these characters, along with Charlotte, serve as touchstones of maturity and dependability in the (sometimes) whirlwind-like environment of the story.

For the most part, the scenery, props, and costumes were appropriately simple. This allowed the family-filled audience quickly to become drawn into the story. All of the animals, except Charlotte, were represented by large wheeled models carved from high-density foam. The actors complemented their respective models and, together, brought the characters to life. Initially, this was very distracting for me. However I quickly realized that what I was seeing was very much like watching my kids play with their action figures and dolls on a much larger scale. I looked around the audience and noticed that none of the children had any trouble supporting this clever technique. In fact, I now wonder if it made the theater experience more relevant for children since it’s a format with which they are all intimately familiar.

The miracle of both the story and the play are, of course, Charlotte’s webs. Although it didn’t employ anything super-fancy or uber-technical, the webs brought magic to everyone in the theater. I wish someone at TOY would take photos of the audience during the reveal of Charlotte’s final word, “Humble” and post them to their website!

Most of the animal models are on the floor of the stage, which made them difficult to see at times. The kids didn’t seem to mind, as they simply rearranged themselves or their family members to get a better view. The adults got over this small issue as soon as they saw that nobody was bothered by all the scooching, knee sitting, and seat swapping their own kids were involved in.

The first act was an hour long. This is not a problem for an adult, but this is a long time for younger kids and an eternity for the sea of preschoolers in the audience. However, as this is a family theater, it was nice to see that the adults in the room didn’t create a true disturbance by scolding their kids for their restlessness.

My very small grumblings aside, Charlotte’s Web at Theatre of Youth is a wonderful show which will introduce your children to the magic of live theater and allow them to become completely immersed in one of our most beloved literary classics.

Charlotte's Web will be playing at the Theatre of Youth in Buffalo on Saturdays and Sundays through June 3, 2012. Performances are at 2 pm.

Helena Robin ...is President and CEO of the Robin family. She coordinates and executes all family operations including (but not limited to) communications, transportation, management, catering, maintenance, troubleshooting, and cultural development. Her Executive Team is comprised of a Husband/Creator of Chaos and three unpaid interns.