Review of Knuffle Bunny: A Cautionary Musical at Theatre of Youth | Kids Out and About Buffalo

Review of Knuffle Bunny: A Cautionary Musical at Theatre of Youth 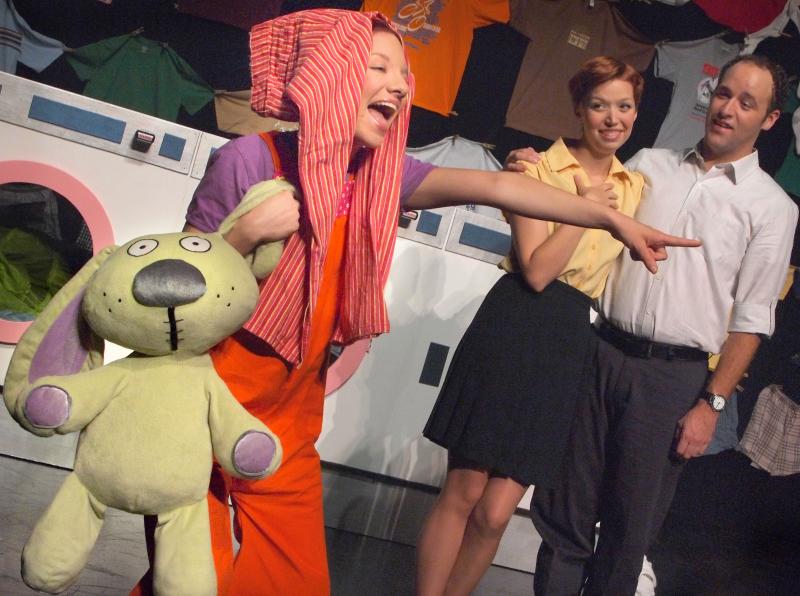 The 2012-2013 season opener at Theatre of Youth brings to life a love triangle between a toddler named Trixie, a stuffed bunny and two adults named Mom and Dad. It is a story of how absolute love and stick-to-it-ivness can triumph over even the most dire mishaps.

Knuffle Bunny: A Cautionary Musical is based on the Caldecott Honored book by author Mo Williams.  Exploring universal situations – the love of a stuffed animal/best friend (and its need to be laundered), the frustration and heartbreak kids and parents face when verbal communication is challenging (to put it mildly) and the earnest efforts of a parent to show their child the world only to have it backfire – the Theatre of Youth utilizes the perfect cast and clever staging techniques to melt the hearts of audience members of all ages.

Trixie, the precocious 16-month-old, is brilliantly played by Maria Droz.  Her ability to completely transform into a toddler, not only vocally but physically as well, was the lynchpin performance of the show.  It’s the kind of role that could easily have been over-acted, but Droz skillfully balanced the various components of her character – voice, movement and expression – and turned herself into an authentic toddler.

The moment when Droz transcends her real-life adult identity and truly becomes a powerless, heartbroken child occurs during the most poignant scene in the show. When Trixie realizes that Knuffle Bunny is missing, she desperately tries to tell Dad. Trixie is so frustratingly unable to make him understand that she explodes into a Primordial swamp of despair and panic. 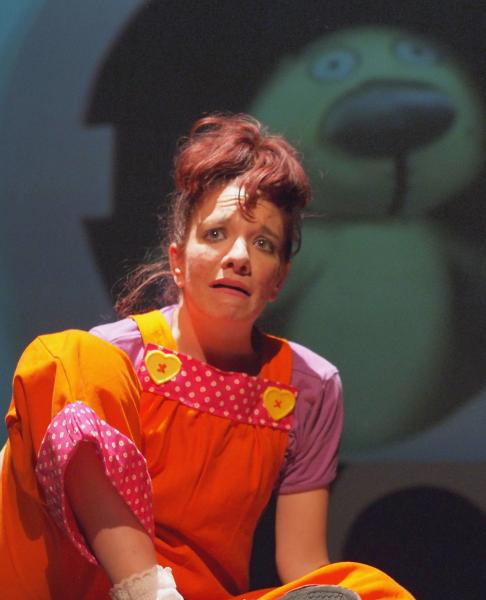 Alone on the dark stage with a single spotlight on her, Trixie sings a song of longing, love and loss – without using a single word that can be found in the dictionary.    The song, sung completely in gibberish, tells the tale of Trixie’s desperation to get Knuffle Bunny back and, with the help of an endearing dance with a life-sized Knuffle Bunny, illustrates how happy and filled with love he makes her feel.  Then, remembering that he is lost, Trixie once again is plunged into despair and hopelessness.  Droz’s ability to tell this story with only the emotion in her voice and the true to life body language familiar to anyone who has ever witnessed a toddler in similar straits is nothing short of amazing.  She translated Trixie’s heartbreak so honestly that this scene stabbed me in the heart and brought to the surface my own remembered  feelings of inadequacy and helplessness when my kids suffered terribly from their inability to tell me what was wrong.

While all the moms and dads in the audience were quietly wiping away a stray tear, or sniffling just a little bit, most of the kids thought it was pretty funny to see this dramatic display up on stage.  The novelty of listening to a song in gibberish was simply too much for them to ignore.  But, don’t be fooled into thinking they didn’t “get it”.  When the song was over, and the stage lights came back up, my 5 year old daughter (who moments before had been absolutely cackling) leaned over and said, “Poor Trixie…she just needs Knuffle Bunny to feel better again!”

Mom and Dad, played by Mary Ryan and Sean Murphy, were well matched and suited their characters beautifully.  Murphy portrayed Dad with a very familiar combination of optimism, nonchalance, innocence and befuddlement.  I have seen this same combination in my own husband.  Often.   Dad’s earnest efforts to share the world with his beloved Trixie end in confusion and misunderstandings instead.  Murphy personifies the dads out there who are struggling to make sense of this small person they can’t relate to, can’t understand, and really want to get to know.

Mary Ryan does a lovely job with Mom – a character she imbues with a subtle blend of anxiety, love, faith and patience.  Mom isn’t the star of the show, but Ryan makes sure she is the shining light of the family.  Able to grasp the root of Trixie’s desperation and help Dad focus on a course of action simultaneously, Mom reassures Trixie and enables Dad to feel like his daughter’s hero.

*Whiplash alert – I am about to launch into something that may feel like a sudden change of subject, but stay with me on this one.*

My mother is fond of remarking that, for a toddler, a trip to a different room in the house is like a trip to Europe for an adult. What an adventure a trip to the Laundromat must be then – especially when it is staffed by members of Theatre of Youth’s ensemble cast!  The four member ensemble is a colorful, singing, tutu-wearing, can-can dancing extravaganza of delight.  Representative of Trixie’s perspective on the glamour and miraculous nature of this new and exotic destination, the ensemble performance is a jewel.  Particularly when you consider that most of their performance is done either in the dark (as puppet masters) or inside the washing machines churning the laundry.

The first thing we noticed as we walked into the theatre were the five projector screens on the stage.  The screens and the various images projected upon them were instrumental in establishing not only the scenery of the show, but also the emotional variations of the characters.  As Trixie and Dad walked from their house (cleverly “built” from actual photos), the images changed accordingly and it was as if the audience was walking along with them.  The kids were excited when they recognized landmark Buffalo buildings and places, occasionally shouting out things like “Hey – I’ve been there!” or, “That’s near my school!”.  My favorite use of the screens was during a duet between Trixie and Dad as they walked to the Laundromat.  In the song, Dad’s melody was sort of mellow and calm and the images projected in the background reflected this.  However, when it was Trixie’s turn, the tempo of the music sped up and the images were what I imagine the inside of a tornado looks like.  It was a great way to incorporate visual and audio clues to represent the excitement and energy of Trixie versus the more mature and casual disposition of Dad. 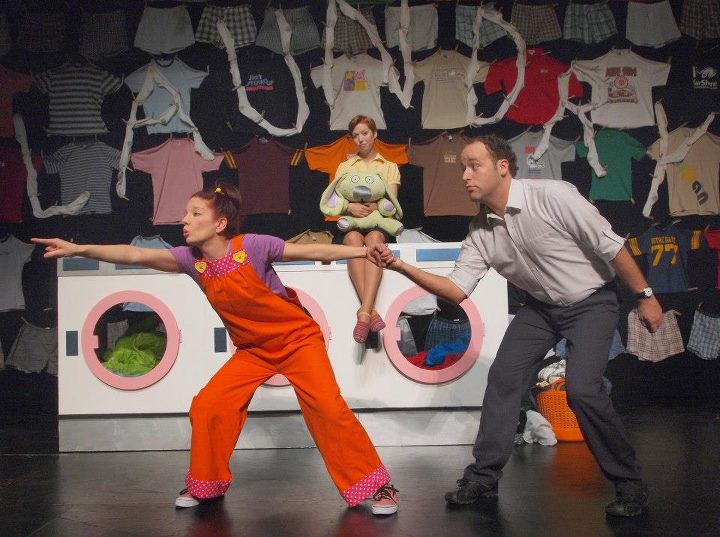 The other fantastic bit of scenery was in the creation of the Laundromat. The only traditionally constructed set piece was the bank of washing machines (designed with large cubbies in the back for prop storage and the special effect clothes washing performed by the ensemble).  The backdrop of the Laundromat is a floor-to-ceiling wall of shirts which has a giant sized  “Laundromat” spelled out with many, many large white socks!  It was a really fun setting and is another example of Theatre of Youth’s skill in doing something both effective and lovely in an elegant way.   They are masters of the “less is more” principle.

Much has already been written and said about the Famous Laundry Scene and I’m not going to spoil it for those of you who are unaware of this cool feature of the show.  I’ve heard it described as “dancing” laundry, but my impression is that it was more of a swordless duel.

Remember the scene in the original Willie Wonka movie where they get onto the strange ship and have a slightly freaky psychedelic boat ride into a tunnel?  The laundry scene in Knuffle Bunny reminded me of this.  At first I was taken by surprise at the change in mood, but now I see it as another great technique used to propel the story to its conclusion.

In real life, grabbing a stuffed animal out of the washing machine is not especially noteworthy. However, seen from Trixie’s perspective (and our kids’ as well), this is more of a drama-filled, action packed search and rescue mission. Theatre of Youth has respected this and created a thrilling suspenseful scene and turned Dad into a hero worthy of Trixie’s love and admiration.

Knuffle Bunny:  A Cautionary Musical is an all-ages show.  With that in mind, the run time is just under an hour, and there is no intermission.  This is great for the youngest audience members, but it also means that there are no snacks or drinks available either.  After the show, my daughter and I walked down to the corner and popped into The Buffalo Cakery for cupcakes and cannoli.  It hit the spot!

The post-show behind the scenes Q and A session with members of the cast and Theatre of Youth’s Artistic Director, Meg Quinn, is also offered.  This is a great opportunity for families to find out about the preparation, process and tricks developed to pull off a staged show.  The normally anonymous sound, lighting, and tech crews are pointed out and their jobs are explained .  This is a feature of Theatre of Youth’s productions that I applaud and admire.  So many times when we, or our children, think of the theatre we only think about the actors or directors.  Perhaps we remember musicians occasionally as well.  This demonstration allows the kids who love shows, but don’t love the idea of being an actor, to see all the various professions integral to creating the magic of theatre!  Genius!!

Share the story with your kids, grab their favorite "lovies" and head to Theatre of Youth before Knuffle Bunny ends its run.  Sometimes, as we are trying to go about the business of our days we forget to see things from our children's perspectives.  Knuffle Bunny: A Cautionary Musical is a lovely, sensitive reminder that life is just bigger to our kids than it is for us.

Knuffle Bunny: A Cautionary Musical is at Theatre of Youth in Buffalo on Saturdays and Sundays through October 7, 2012.