The "Science of Sports" at the Buffalo Museum of Science

If your image of science is derived from your high school chemistry class, then visiting a science museum with your kids might not be on the top of your list. It’s understandable. But you don’t know what you are missing!

The Science of Sports interactive exhibit opened at the Buffalo Museum of Science recently, and I was excited to visit with my kids. I confess that most of us in our family like sports–playing sports, watching sports, arguing about sports–but some of us enjoy other activities more. So one of the questions I had before our visit was whether it was going to hold the interest of my daughters.

The short answer is that the exhibit is so hands-on and fun that you don’t need to be a sports fan to have a great time.

The components of hockey and football are very well represented at The Science of Sports, not only because of the popularity the local pro teams enjoy, but also because of those teams' generosity in supporting the museum and this exhibit.

Other sports represented include baseball, lacrosse, and golf, and the exhibit also includes a small nod to cheerleading.  It was nice to see that the strength and balance required of cheerleaders was the focus and not their cute outfits.

One thing to keep in mind when visiting The Science of Sports is that it would be impossible for all sports to be directly represented. The activities in the exhibit might be specific to a particular sport, but you can relate many of the skills to your kids’ favorites.  For

example, soccer doesn’t play a role in the exhibit, but when my girls were running the 10-yard dash (and being digitally timed!), we talked about the speed required of soccer players, not football players. The museum also has plans to host a variety of smaller activities which address different aspects of sports on a rotating basis; they say upcoming features will include segments on sports medicine and a special program for youth coaches to learn more about concussions.

Enclosed in a long, narrow plexiglass booth, the Rapidshot system fires pucks at visitors which they can either “one time” or stop and shoot.  Rapidshot is a bonafide training system used by professional hockey players to track improvements in the speed, accuracy and strength of their shots. *Although not calibrated for young kids, my 5-year-old was able to stop every puck and send the puck back over the red line. My 8-year-old was able to get a couple of good shots off. Neither one received any computed feedback, but they didn’t care about feedback! They just had a great time having the booth to themselves and whacking hockey pucks in a museum. Making it even more fun, the museum staffer who was in the booth with them was very patient, encouraging, and funny.

This is one penalty box you won’t mind your kids spending some time in (and it smells much better too)!  This miniature version of hockey’s “time out” is turned into a quiet spot to take a cool online sports trivia quiz. The questions aren’t concerned with player stats or team histories, but with interesting facts concerning equipment, the geometry of shots, and the superiority of various techniques. 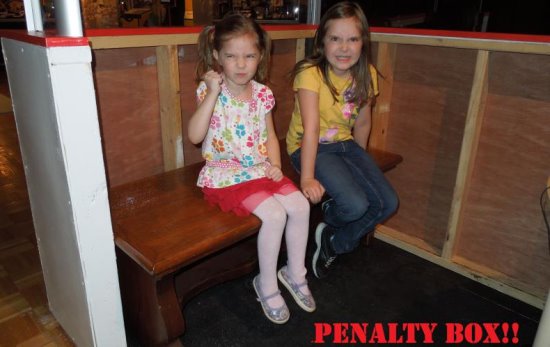 *The girls had a great time guessing and then learning the answers.  I loved it when they thought I was a genius for knowing the answers to some of them!

This is one activity that is definitely geared toward younger visitors, but which older ones will enjoy as well. In a special netted-off section, visitors can either pitch softball-sized whiffle balls into a small goal or use the lacrosse sticks to do the same. The lacrosse sticks are the cute, plastic white ones with the orange nets you might have purchased from Target. *Unlike in our backyard, the girls concentrated on their mission to get the balls into the goal and never once hit one another with the lacrosse sticks! They even willingly took turns with another small visitor to the exhibit.

This activity is set up to look like a small section of a football field, complete with green turf and white distance markers. Visitors hit a big square button which flashes and counts down the time until a horn sounds signaling “RUN FOR YOUR LIFE.” A motion sensor at the end triggers the digital clock to stop so visitors can see how fast they just ran.  *This activity really brought out the competitors in my girls.  Naturally, they were trash talking each other’s scores, but it was clear that they were much more interested in improving their own times.

It’s true that this part of the exhibit isn’t an activity, but who doesn’t love sticking their heads on a silly cardboard body?? There are a total of four to choose from – two football players and two refs. * Unfortunately, even with the little steps behind them, my 8-year-old was only tall enough to stand behind one of them, and the 5-year-old didn’t stand a chance. That being said, they still had fun taking photos where all you can see are the tops of their heads or their eyes. We looked at the pictures we took during our visit last night and they laughed their heads off.

The” Science of Sports” is a great exhibit!  Your family will have a fun time whether they are sports fans or not, and the people in your life who are only interested in sports will have a great time. Unlike the games they represent, this is a win-win situation. Sure, the exhibit is geared towards scientific concepts in sports, but it also provides parents a great opportunity to introduce or re-introduce ideas like sportsmanship (“It doesn’t matter if your score was higher than his, try to beat your own score during your next turn”), a strong work ethic (“Hockey players don’t stop trying to improve once they get to the NHL…they keep working hard every day and get to use the Rapidshot to help them.”) and making healthful choices (“athletes can’t be strong or fast unless they go to bed at their bed times and fuel their bodies with the right foods”).

If you think the Buffalo Museum of Science is the same one you visited on your 5th-grade field trip, you’d be mistaken.  In the last two years, the museum has undertaken a massive re-evaluation of itself and has many exciting upgrades and additions planned over the course of the next 3-4 years.  There are already new exhibit spaces, cool interactive exhibits and exciting programs.  This is one museum you need to check back with frequently so that you can be a part of all the new features being installed almost constantly!  It’s a very exciting time at the Buffalo Museum of Science!!! So get in the game and stay tuned!

The Science of Sports is at the Buffalo Museum of Science through January 6, 2013.