BeyondTheNest Reviews Geva's ONE HOUSE OVER | Kids Out and About Buffalo 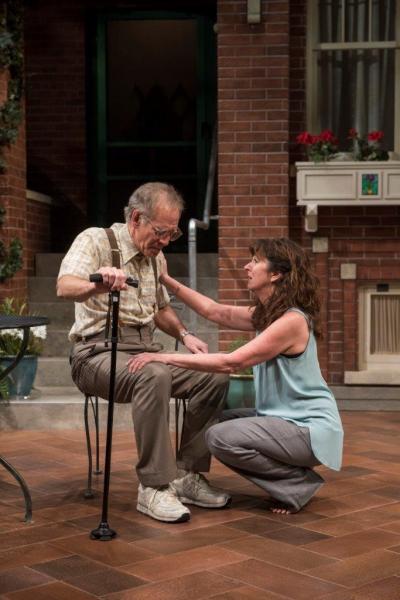 Geva Theatre Center plans its upcoming season a year or more out, yet it is uncanny how many of its plays are incredibly timely. Such was the case with its last production, Heartland, and it is definitely the case with the World Premiere of One House Over, written by Catherine Trieschmann, deftly directed by Mark Clements, and co-produced with Milwaukee Repertory Theatre.

One House Over is a poignant and hard-hitting drama with scintillating moments of comedy. We “drop in” on Joanne Vancurra (Elaine Rivkin) as she is hiring Camilla Hernandez, a Mexican home health worker, to assist in caring for her elderly father Milos Vancurra (Mark Jacoby). Milos, a refugee who lost his family escaping Nazi-occupied Czechoslavokia, is cranky, bigoted, and as wily as they come. In exchange for deflecting his shenanigans, Camilla will receive cash wages and she, together with her DACA immigrant husband Rafael Hernandez, will live in Joanne’s undeclared basement apartment.

In addition to exploring the issues of aging, illness, and the dearth of options for families to deal with either, this play also weaves through the land mines of power, privilege, and prejudice.

As the patient, yet feisty Camilla, Zoe Sophia Garcia takes us inside the not-unfounded fear she can never escape…that one wrong move, one innocent misstep may get her deported. For her Dreamer husband, played with charm and swagger by Justin Huen, the impermeable borders of a country he can never leave without certain permanent exile are far more real and excruciating than fear of deportation to a country he doesn’t remember. Many humorous situations evolve as the two families acclimate to living with “outsiders,” who soon become “insiders,” as lives overlap. We quickly learn that even the most liberal among us harbor little corners of ignorance that can surface as prejudice.

We also discover that bigotry has few boundaries, and its only remedy is in getting to know the "other." So, in the scene in which Camilla and Milos trade “war stories” of their horrific escapes, friendship grows between them. For most in the audience, the opportunity to “live inside their words” presents a startling clarity of the immigrant experience.

The most touching dramas are those where, through the course of the play, the characters become “friends” we care about, sharing their hopes, dreams, and fears. This phenomenal cast couldn’t be more adept at that. From crotchety Milos whose crusty shell slowly dissolves as he comes to appreciate the generous spirit of Camilla, to lonely Joanne whose appreciation of wannabe chef Rafael’s food brings them a little too close for comfort, the cast resonates. Even with her brief appearances, snooty and nosy Patty (Jeanne Paulsen), who lives one house over and threatens the status quo, makes us care about her.

For me, the finale came too soon: I wanted to go beyond the all-too-real-life ending to know how their lives turn out. The authenticity of this play is palpable, with memorable acting, a gorgeous set by Kevin Depinet that epitomizes the walls we build between ourselves, and beautiful original music by Joe Cerqua.

This is an important production to see, especially at a time when funds are being allocated to build rather than shatter walls, immigrant deportations are on the rise, and DACA status is threatened.

One House Over can be seen on Geva’s Wilson Stage through April 29.

Photo: Elaine Rivkin and Mark Jacoby in One House Over. Photo by Michael Brosilow