Artpark Fairy House Festival | Kids Out and About Buffalo 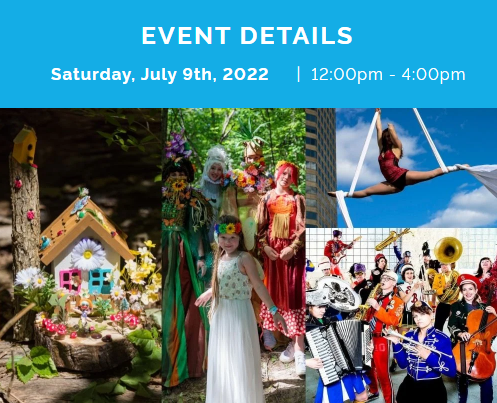 Now in its 12th year, Artpark’s Fairy House Festival welcomes visitors of all ages to marvel at fairy house creations by professional and community artists. Interact with the whimsical and enchanting Artpark Fairies and roaming musicians outfitted in new costume creations by artist and designer Uta Bakaia of Tbilisi, Georgia. During the afternoon, special musical guests Mucca Pazza will entertain with a rock & roll marching band, street theater extravaganza. WNYC described the group as “Seeing this irresistible band of horns and violins, guitars and accordion all parade in and eventually take the stage is infectious, chaotic fun. But it’s also an incredibly coordinated and choreographed performance full of cheers and bursting with energy that is easy to get caught up in.” Aerial and acrobatic feats will also be featured in a performance entitled “Battements de Cirque.” It is created by Anouk Vallée-Charest, an international circus artist who’s previously worked with Cirque du Soleil, Cirque Éloize and more, and will include four performers. The artists will dazzle you with their poetry, prowess, unparalleled agility and grace. You will be delighted with this dynamic and refreshing show including juggling, balance, aerial fabric, aerial hoop, and much more. Visitors can once again marvel at the fairy house creations and enjoy the whimsical and enchanting Artpark Fairies and roaming musicians outfitted in new costume creations by Uta Bekaia.
Click here for more information about this activity
Please help us keep this calendar up to date! If this activity is sold out, canceled, or otherwise needs alteration, email mindy@kidsoutandabout.com so we can update it immediately.

All Ages Adults & kids together