Review of Breakfast with St. Nick and Preparing for the Holidays at Genesee Country Village and Museum | Kids Out and About Buffalo

Review of Breakfast with St. Nick and Preparing for the Holidays at Genesee Country Village and Museum 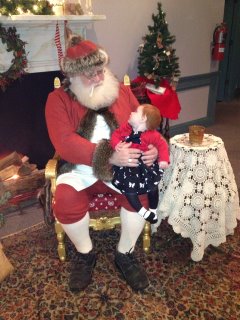 These days, the holidays are filled with much hype and many ways to whip your kids into a frenzy. In contrast, Breakfast with St. Nick and Preparing for the Holidays at Genesee Country Village is welcome, gentle, decidedly calm, yet festive, fun, and endearing way to kick off the holiday season.

As an added bonus, it takes place on the Saturday after Thanksgiving, making it a great way to entertain out of town guests. The breakfast is held in the meeting center with three seatings at 9:30, 10:30, and 11:30 am. Preparing for the Holidays the 19th Century Way is held the same day in the historic village from 10 am until 4pm.

Sparkling lights and elegant greenery decorate the meeting center to welcome visitors and the holiday season both. While casual attire is absolutely fine, little children in their holiday finery delighted us as we settled in to our table.

Breakfast was served buffet style, and the line was short when we arrived. Nothing says “special treat” better than chocolate chip pancakes with syrup and whipped cream. Sauteed apples were also a great topping. Regular pancakes were also available. Scrambled eggs and sausage rounded out the food offerings. The beverage bar almost enticed me into indulging in a yummy hot chocolate and topping it with whipped cream and sprinkles, but I stuck with coffee and O.J. I can’t say the same for my kids.

After we had eaten as many pancakes as we could hold, it was time to visit St. Nick.  This was not your typical Santa Claus, mind you: This was an old-fashioned St. Nick, dressed in red velvet, still managing to exude all of the same Christmas spirit, perhaps even more so. The white beard was real, as was the gentle, kind manner he had about him. The room was beautifully decorated with lights and trees and there were plenty of opportunities to get a perfect Christmas card picture, with or without the Jolly Old Elf.

One of my favorite parts about the visit was the treat bag which was given to the children after their visit with St. Nick. It was a brown paper bag, tied with string. It had a gloriously natural, real quality to it instead of a thoughtless, mass produced one. The contents were an object lesson in 19-century living: a tangerine (Really? You mean citrus would have been not easily obtainable whenever you wanted it?), a candy cane (Candy was an equally rare treat!?), and a little toy trinket (you mean kids didn’t have massive quantities of toys?).

Preparing for the Holidays: The Village's annual event

It was now time to wander over to the village and see how preparations were coming for the holidays. We were lucky; it wasn’t too cold, but we had come prepared just case, and there were plenty of opportunities to duck inside one of the buildings to get warm and observe all of the many things that needed to be done to prepare for the Christmas season.

Sausage was being made, candles dipped, beer brewed, pies and candies were being baked, there was even a hog being butchered, plus much more. Kids will love seeing and smelling all of the sweets being made and I couldn’t get the older members of my family to leave the brew house; it was the first time we had seen it operational and the beer lovers in my group were fascinated. I personally loved the sausage making demonstration!

To round out the day, the kids were able to do 19th-century crafts in the Freight House. I enjoy those simple, easy crafts like sticking cloves into an orange in a pretty pattern. It fills the whole room with wonderful fragrance! There was an additional charge of $4 per craft or all five crafts for $15. It was well worth it, though.