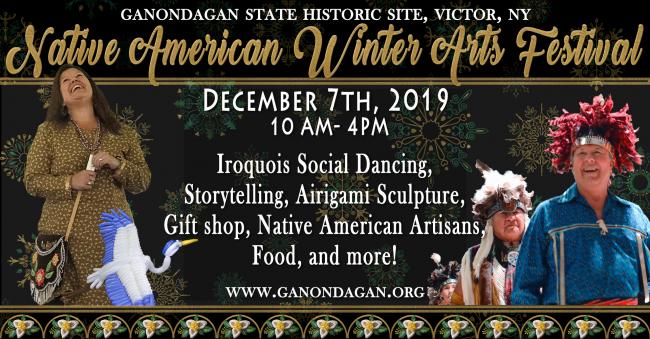 Visit Ganondagan’s 2019 Native American Winter Arts Festival to experience the wide array of Haudenosaunee (Iroquois) living culture, but with a new and unusual twist. In addition to Iroquois Social Dancers in regalia, storytelling, traditional foods, a silent auction, and a Native American holiday market, a new collaboration with Airigami—the artists who create large-scale installations entirely of balloons—provides a unique visual, educational, and participatory storytelling element.
Click here for more information about this activity

Join us for our Native American Winter Arts Festival including  performances by Iroquois Social Dancers in regalia, storytelling, traditional foods, a silent auction, and a Native American artisan gift market.

For the very first time, Friends of Ganondagan is collaborating with Airigami who will be building and installing a large balloon creation to visually capture the essence of the Iroquois Creation Story, particularly Skywoman and the story of how Turtle Island came to be.

Utilizing over 600 balloons, the Skywoman sculpture is a “representation of the story that unfolds over the span of the sculpture,” said Artistic Director Kelly Cheatle. When completed, the piece will reach 18-20 feet to the ceiling of the Seneca Art & Culture Center auditorium where the work will be created. “We are excited to collaborate with Ganondagan and visually interpret the Haudenosaunee creation story using our unique medium,” added Cheatle. “Storytelling is an integral part of our work at Airigami that we share with Native American culture—and Ganondagan.

In keeping with the Haudenosaunee (Iroquois) Seventh Generation principle in which decisions are made based on how they affect seven generations out, Airigami partners with Impact Earth to reduce its environmental footprint. Once the sculpture exhibition has ended, all of the natural latex rubber balloons from the piece will be composted.

This event is FREE and open to the public!